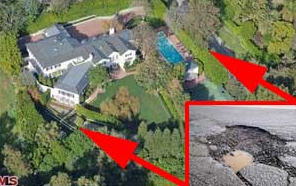 Holmby Hills resident William Fleischman is leading a crusade to move his neighborhood from Los Angeles to Beverly Hills. The reason for the municipal apostasy? Potholes. According to the LA Times, Fleischman approached the Beverly Hills City Council earlier this month with a request “to consider annexing the 40 or so members of the Holmby Hills Homeowners Assn. north of Sunset and east of Beverly Glen Boulevard.” The way Fleischman sees it, the particularly wealthy neighborhood of Holmby Hills isn’t seeing a return on its property tax investments (it was home to several of 2011’s biggest home sales, for instance): “Holmby Hills pays millions of dollars to Los Angeles in property taxes, and we’re getting back thousands of dollars in services.” As noted by LA Observed, property taxes are, of course, paid to the county, which then pays some of that money to cities. Moreover, ever since a state decision to dissolve redevelopment agencies, cities get even less of that property tax money than they used to. In another sound bite masterpiece, Fleischman admits that his neighborhood risks sounding like “spoiled brats” for complaining about municipal services amid the city’s money woes. But annexation is “our only option after 20 years of frustration.” Read More

Some of the concrete roads in Holmby Hills were built in 1926, when the neighborhood was originally developed by Janss Investment Co.–the concrete used for the streets is more difficult to repair than asphalt, even if Los Angeles had more resources.

Even more difficult than repairing the streets would be getting the annexation deal done. LA is not likely to give up Holmby Hills, and Beverly Hills doesn’t seem to want any newcomers, even very rich ones, apparently. Beverly Hills Councilmember John Mirisch says: “I understand people would like to have our services –the kinds of roads we have, the police and fire response. But extending the borders is not the solution.”
· Holmby Hills seeks annexation by Beverly Hills over potholes [LA Times]